Missing Massachusetts mom Ana Walshe expressed support for her art fraudster husband in a letter she wrote to a judge last summer, just months before he was charged with misleading a police investigation into her disappearance.

Walshe shared touching anecdotes about their family life in the letter to a federal judge in June to seek leniency for Brian Walshe, who was on house arrest awaiting sentencing for selling two fake Andy Warhol paintings on eBay for $80,000, Boston 25 News reported.

“During these eight months, our family was able to be together during many of the milestones,” Ana wrote, referring to the time that her husband had been on house confinement.

“Our youngest son turned one, our middle son started to speak and our eldest son who had just started kindergarten when we saw you last is now only a few weeks away from completing the year and preparing for first grade,” she wrote.

She also lavished her husband with praise for helping her mother when she suffered a brain aneurysm in December 2021, according to Boston 25 News.

“Not only did he save her life, but he also brought her and the entire family comfort and joy during the course of her illness,” Ana wrote.

During that time, she wrote that Brian also continued “to take care of his ailing elderly mother and be there for his sons day in and day out.”

Ana continued: “Whether it was walking for World (Peace) Day in Dorchester, or stopping by the Pine Street Inn in Boston to drop off food and sanitary supplies, Brian has been teaching our young boys from early age how important it is to share the joy and be in contribution with time and resources.”

According to court documents cited by the station, Brian is the primary caretaker of their three sons, ages 6, 4 and 2, while his wife spends time working in Washington, DC.

“Brian has been working consistently on breaking the past bad habits of his family and we are all looking forward to the new chapter of his life,” Ana reportedly wrote.

It was unclear what she was referring to regarding the man’s family.

Brian, 47, has been on house arrest after being busted for selling the two paintings in 2016 he claimed were part of Warhol’s 1978 “Shadows” series to an unsuspecting buyer on eBay for $80,000, according to the US Attorney’s Office for the District of Massachusetts.

He pled guilty in April 2021 to one count each of wire fraud, interstate transportation to defraud, possession of converted goods and unlawful monetary transaction, but is still awaiting sentencing in the case.

On Sunday, Brian was charged with misleading police during their probe into his missing wife, who disappeared on New Year’s Day after he claimed she took a rideshare service to Logan International Airport in Boston.

Ana’s mother, Milanka Ljubicic, 69, told Fox News Digital that her daughter begged her to visit from her home country of Serbia a week before her disappearance.

“She just said, ‘Please, mama. Come tomorrow,’” Ljubicic told the outlet on Monday from her home in Belgrade. “Which means, that clearly, there must have been some problems.”

During Brian’s court hearing Monday, Assistant DA Lynn Beland told the judge that a blood-covered knife was found in the couple’s home.

Brian told investigators he went on Jan. 2 to get ice cream for his eldest son, but surveillance video shows he visited Home Depot store in a mask and gloves to buy a tarpaulin, mops, tape, bucket and other cleaning supplies, Beland said.

Brian’s internet history also indicated he searched “how to dispose of a 115-pound woman’s body” at the time of Ana’s disappearance, according to a CNN report.

Two law enforcement sources also told CNN that he looked up how to dismember a body.

Walshe pleaded not guilty and was ordered held on $500,000 bail pending a court appearance Feb. 9.

At this point, he only stands charged with misleading a police investigation while authorities are looking for Ana. 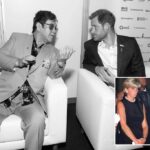 Prince Harry reveals biggest ‘disagreement’ he had with Elton John 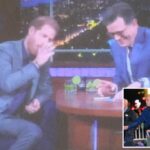