Amy, 60, took to her Instagram Stories on Sunday, October 9, to reveal that she and Chris, 60, adopted a rescue dog named Daisy May.

“The new addition to our family – my new rescue dog Daisy (May),” the reality star wrote alongside a photo of the couple with the pup.

The mother of four went on to share adorable photos of Daisy via her Instagram Stories on Monday, October 10, including snaps of her playing on Roloff Farms.

“Daisy is part of our family,” Amy wrote alongside an adorable photo of her hugging the dog while posing in a field of pumpkins.

The TLC star welcomed Daisy into her family just over one year after she married Chris in August 2021.

After Chris proposed to Amy in September 2019, they got hitched on August 28, 2021. The couple professed their love for each other in front of 146 of their closest friends and family members, which was featured on the special Amy and Chris’ Happily Ever After.

Amy – who was married to Matt Roloff from 1987 until 2016 – celebrated her milestone 60th birthday with family in September.

On September 25, Amy’s daughters-in-law Tori Roloff and Audrey Roloff came together to celebrate the birthday girl with a belated party.

“My kids and grandkids gave me a very special birthday celebration surprise,” Amy shared via her Instagram Stories alongside a photo of herself and Chris one day after the party. “Perfect birthday with them and Chris.”

The Roloff matriarch, who officially turned 60 on September 17, added, “What? Yes, I’m still celebrating and no better way than with Chris and my kids and grandkids.”

Tori, 31, also shared a series of photos from the special day on her Instagram Stories.

“All the [daughters-in-law] pulled off an awesome surprise for Mimi’s 60th birthday!!” Zach Roloff’s wife shared. “We love you!!” Tori wrote over a photo of Amy and her three children, Jackson, Lilah and Josiah.

Tori went on to reveal that they “loved getting everyone together” for the occasion. “Rallying seven grandkids is no easy task,” the Oregon native continued, with a photo of her son Jackson, 5, and niece Ember, 5, posing in front of a sparkly pink wall with giant “6” and “0” rose gold balloons. 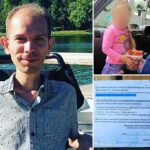 Russian man in wheelchair called up for combat duty