Trendy meets edgy! Face tattoos are all the rage in Hollywood right now. With big-name stars like Justin Bieber, Post Malone and Amber Rose sporting art on their moneymakers, others are following their lead.

Maroon 5 crooner Adam Levine made headlines in 2021 after he was spotted rocking a new long-stem rose next to his left eye. The “Girls Like You” singer’s wife, Behati Prinsloo, gave the first glimpse at his romantic ink while taking to Instagram Stories that November with a photo she captured on the go, but he’s since confirmed it was only temporary.

In 2020, Amber’s tattoos were the talk of the town. At the time, she opened up about her controversial choice to get her sons’ names permanently etched onto her forehead.

“Not everybody is gonna get a face tat. That’s what separates me from them,” she told Stylish while celebrating her debut on OnlyFans in October 2020. “I don’t live my life for other people … If I let people affect me in that way, I would just be miserable every day.”

“I wouldn’t be the great mom that I am. I would be depressed, and I would be filled with anxiety,” the model explained. “I love my body, I’m cool with my body, and I do what I want with my body. … You just gotta be who you are, and if someone likes you, they’ll join the bandwagon, and if not, they’re just not for you. It’s not really a big deal for me.”

As for Justin, well, the “Peaches” singer is known for having a plethora of bold tattoos, and he opted for a smaller, more discreet one on his face.

“I look back at a lot of things in my life, mistakes, insecurities, and although I have felt I’ve wasted a lot of time, it also makes me want to be better faster!” he previously shared about a “Better at 70” tattoo directly above his left kneecap. “For me, personally, I want to work every day to be BETTER AT 70.”

Post Malone has more tattoos on his face than some people have on their entire body, and we like it. The musician added another piece of face art in honor of his daughter, who was born in June 2022.

The “Sunflower” singer had the initials “DDP” tattooed in bold on his forehead, so his little one will always be on his mind.

Check out these celebrities who wear their art where you can’t miss it! 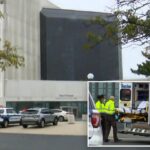 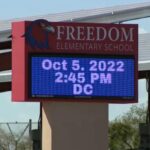