The man who allegedly attacked House Speaker Nancy Pelosi’s husband Paul with a hammer after breaking into the couple’s San Francisco home was carrying zip ties with him, according to reports on Sunday.

A person briefed on the investigation, speaking on the condition of anonymity, told the Associated Press the chilling detail about suspect David DePape, who was arrested early Friday.

It was reminiscent of the Jan. 6, 2021, Capitol riot, where some in the mob seeking to overturn President Biden’s election victory carried zip ties. Rioters stormed Pelosi’s office demanding to know “Where’s Nancy?” — the same question DePape allegedly asked after confronting her husband during the break-in.

DePape, 42, allegedly fractured 82-year-old Paul Pelosi’s skull after attacking him with a hammer.

He is expected to be charged with attempted murder, assault with a deadly weapon, elder abuse, burglary and “several other additional felonies,” police said. His first court appearance is expected on Tuesday.

The speaker’s husband underwent surgery following the attack and is expected to make a full recovery.

The California Democrat was not home at the time and returned to San Francisco following the attack.

“Our children, our grandchildren and I are heartbroken and traumatized by the life-threatening attack on our Pop,” the congresswoman wrote in a letter to her colleagues Saturday. “We are grateful for the quick response of law enforcement and emergency services, and for the life-saving medical care he is receiving.”

During the Friday attack, Paul Pelosi was able to call 911 from the bathroom, police said.

“What’s going on? Why are you here? What are you going to do to me?” he said in coded language to try to alert law enforcement without escalating the situation with DePape.

The alleged attacker had been living in a school bus weeks before the attack, neighbors previously told The Post.

“He usually kept to himself,” neighbor Ryan La Coste told The Post. “He would just give us a blank stare when we would walk by. We tried to stay clear of him. … No one knew he was here because he would be on the bus or he just didn’t communicate.”

His stepdaughter Inti Gonzalez wrote on Facebook post that he made made several racist posts on his personal blog, including conspiracy theories about the 2020 election results.

Gonzalez also accused DePape of sexually abusing her and her brothers. 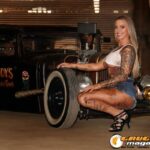 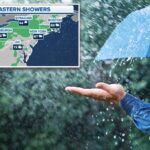 Storm system bringing chances of rain to East through Tuesday