Alec Baldwin filed a lawsuit against several crew members of “Rust” on Friday for providing him with the loaded gun that he fired on set, killing cinematographer Halyna Hutchins last year.

Baldwin, who is awaiting a decision on whether he’ll face criminal charges in the shooting, accused “Rust’s” armorer and first assistant director, among others, of negligence in a cross-complaint following a lawsuit filed against him last year by script supervisor Mamie Mitchell, the New York Times reported.

Mitchell accused Baldwin of “recklessly” firing the gun that killed Hutchins, 42, as she was standing next to her, causing her emotional distress.

Baldwin’s suit names Hannah Gutierrez-Reed, the film’s rookie armorer who was in charge of handling guns and ammunition on set in New Mexico, as well as assistant director David Halls, who handed the loaded gun to Baldwin after he announced it was safe, the report said.

Sarah Zachry, the head of the crew’s props department, and Seth Kenney, who supplied the guns and ammunition to the set, were also named, The Times reported.

“This tragedy happened because live bullets were delivered to the set and loaded into the gun,” the lawsuit alleges, according to The Times.

Last week, Baldwin lost his bid to toss Mitchell’s lawsuit – one of many filed against the actor following the shooting —  after a  Los Angeles County Superior Court ruled that Mitchell can press on with her claims of assault, intentional infliction of emotional distress and negligence against the actor. Gutierrez-Reed and Hall are also named in her complaint.

Baldwin shot and killed Hutchinson more than a year ago on Oct. 21, 2021, while filming a scene for the independent western on a ranch outside of Sante Fe. While practicing a cross-draw on set with a replica Pietta Colt .45, the gun discharged, striking Hutchins and director Joel Souza, 49.  Hutchins died from her wounds.

Baldwin, and those named in his suit, have repeatedly denied any responsibility for the shooting.

The actor said that the gun went off accidentally and that he did not pull the trigger. However, a recent FBI forensic report found the weapon could not have fired unless the trigger was pulled.

Last month, the Santa Fe Sheriff’s Office completed its investigation into the fatal shooting. Criminal charges against those involved, including Baldwin, and may be imminent, pending a decision from District Attorney Mary Carmack-Altwies.

Last month, the production announced that filming would continue after a settlement was reached with Hutchins’ estate. Her widower, Matthew Hutchins, will be an executive producer. 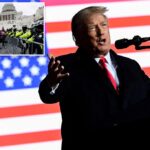 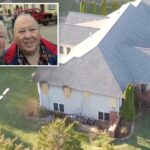