Alec Baldwin has been criminally charged with involuntary manslaughter in connection with the “Rust” shooting that left a cinematographer dead, prosecutors said Thursday.

The long-awaited decision to charge the “30 Rock” star and three others came after a meticulous investigation revealed all bore responsibility for the shooting that killed married mom Halyna Hutchins, 42 and injured Joel Souza, 49.

Each defendant will get a preliminary court hearing within 60 days to determine if there is probable cause to go to trial, prosecutors said.

While Carmack-Altwies previously acknowledged Baldwin was responsible for firing the fatal round, she said “many individuals” on-set had handled the gun prior to the tragedy and could be criminally liable.

During the initial investigation, detectives from the Santa Fe Sheriff’s Office said they found a mixture of dummy and live rounds scattered throughout the set, which is a violation of industry safety standards. At the time, Carmack-Altwies said determining how the live rounds got to the set “will be one of the most important factors going into a charging decision.”

The crew member in charge of ammo and weapons on set, armorer Hannah Gutierrez-Reed, has repeatedly denied responsibility for the shooting. In January, she filed suit against the props company that supplied the rounds, alleging they sold blanks and lives mixed together.

At the time of the shooting, Baldwin was sitting on a pew in a mock church at the Bonanza Creek Ranch rehearsing a cross draw as Hutchins and Souza stood behind the camera.

As he rehearsed, he pulled out the gun, pointed it directly at the camera and fired a single bullet that struck both Hutchins and Souza.

The Emmy winner has repeatedly denied pulling the trigger, saying the gun went off accidentally, but an FBI forensic report released in August concluded the firearm couldn’t have gone off unless someone pulled the trigger.

Souza told police he recalled hearing the phrase “cold gun” while preparing for the scene, indicating the firearm wasn’t loaded and was safe for use, but he couldn’t remember if the gun had been checked before it was handed to Baldwin.

Assistant director David Halls was the one who handed the gun to Baldwin and admitted to police he “should have checked” all of the rounds inside the barrel after Gutirrez-Reed passed it over to him.

“David advised when Hannah showed him the firearm before continuing rehearsal, he could only remember seeing three rounds. He advised he should have checked all of them, but didn’t, and couldn’t recall if she spun the drum,” detectives wrote in a search warrant affidavit filed last fall.

When asked about the safety protocols on set in regards to firearms, Hall told police the armorer typically “spins the drum” and checks to ensure there are no live rounds before handing it off.

“I check the barrel for obstructions, most of the time there’s no live fire, [Hannah] opens the hatch and spins the drum, and I say cold gun on set,” Halls told authorities.

During Gutierrez-Reed’s interview with cops, she told investigators she checked the “dummies” and “ensured they were not ‘hot’ rounds,” the affidavit stated.

“Hannah advised she handed the gun to Alec Baldwin a couple times, and also handed it to David Halls. When [a detective] asked about live ammo on set, Hannah responded no live ammo is ever kept on set,” the filing stated.

After the round struck the two crew members, Halls picked up the gun from the pew where Baldwin was sitting and handed it to Gutierrez-Reed.

The rookie armorer was told to “open” the gun so Halls could see what was inside and he recalled seeing at least four “dummy” casings with the hole on the side, “and one without the hole,” the affidavit said.

“He advised this round did not have the ‘cap’ on it and was just the casing. David advised the incident was not a deliberate act.”

According to the search warrant, when the crew broke for lunch the day of the shooting, the firearms were secured in the prop truck but during lunch, Gutierrez told police the ammo “was left on a cart on the set, not secured,” the document said.

In February, Hutchins’ family filed a wrongful death lawsuit against Baldwin alleging the actor was responsible for the filmmaker’s death because he was the “person holding the weapon.”

“I think it’s clear what happened,” Hutchins family lawyer Brian Panish said at a press conference in Los Angeles after the suit was filed.

“He had the gun, he says he pulled the hammer back, it fired, and she was killed. … The experts will look at it and make any determinations, but we don’t think this was caused by any defect in the weapon.”

The lawsuit was settled for an undisclosed amount in October.

As a part of the settlement, Hutchins’ widow, Matthew, was also named as an executive producer on film.

Randi McGinn, a lawyer from Albuquerque who is also representing the Hutchins family, said she is confident that a New Mexico jury will be able to understand the complexities of the case.

“We’re used to people coming in from out of town to play cowboy who don’t know how to use guns,” McGinn said.

“The jury in Santa Fe is used to that and understands that even on a dude ranch, you don’t hand somebody a gun until you’ve given them safety training. … No one should ever die with a real gun on a make-believe set.” 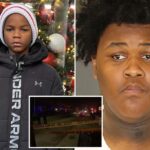 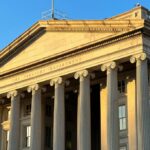