An Alabama woman was stabbed over 100 times and decapitated by her boyfriend after she refused to have sex with him, according to police.

Justin Fields, 38, is charged with murdering 52-year-old Tammy Bailey after he got blackout drunk celebrating his birthday, police told Al.com.

When police discovered Bailey, her head was found lying by her feet and one of her arms had been severed, Blount County Sheriff Mark Moon said.

The couple had gone out to several local bars on Friday night to celebrate Fields’ birthday before they returned to Bailey’s house where the two lived together.

When they got back, Fields drank a glass of brandy and was playing guitar in his bedroom when he decided he wanted to have sex, Moon said. He went into Bailey’s room and asked her.

“She refused him,’’ Moon said, “and, according to his statement, it frustrated him, and he stabbed her in the chest.”

After he allegedly stabbed her, Fields told investigators that he blacked out and fell asleep. When he woke up Saturday morning and saw her bloody body, he thought he was having a nightmare and stabbed her over 100 times with the eight-inch blade.

“We’re pretty sure she was dead on the first blow,’’ Moon said. “When he went back in there the next day, she had not moved.”

Fields called his father in a panic and told him that he “had done something horrible” and wanted to kill himself. The father then called one of Bailey’s relatives who lives nearby.

When she went to the house, Fields refused to let her inside, telling her “what’s inside is terrible and she doesn’t want to see it,’’ Moon said. She then called 911.

Police arrived at the home around 5:30 p.m. on Friday. Fields was sitting outside on the front steps and told a deputy that he had done something horrible and that all the evidence was inside.

The deputy, wary of Fields’ ominous comments, told him that he was going to put him in handcuffs for both their safety.

Once backup arrived, two deputies entered the home and found the gruesome scene.

Fields has no criminal history. It’s unknown if he has any history of mental illness, according to police. He’s been interviewed twice by investigators since he was detained.

“He admitted to my investigator everything he’d done so he was stable enough to know what he was doing,’’ Moon said. “He was frustrated because he didn’t get what he wanted.”

The officers who responded to the home have been struggling to cope with the experience.

“Obviously it was pretty hard on them because they’ve never experienced anything like that,” the sheriff said.

Fields was taken into custody at the scene and booked in the Blount County Jail on Sunday. He’s charged with murder and abuse of a corpse, jail records show. 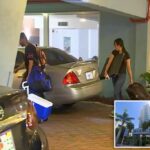