A Nashville airport police officer was caught on camera threatening to arrest Southwest Airlines customers for trespassing after they became stranded during the Christmas travel chaos.

The recording was posted on TikTok Wednesday by 20-year-old Amani Robinson, showing the airport cop speaking to a group of travelers lined up at a counter outside a gate.

“If you have no ticket, you don’t need to be on the secured side,” the officer tells the customers.

“But we have tickets,” one of the frustrated passengers protests.

“You ticket just got canceled,” the cop shoots back.

When Robinson’s mother, Shelley Morrison, asks the airport officer why they would be arrested for trespassing, the man replies: “If you don’t have a valid ticket and you’re on the secured side and you refuse to leave, you’ll be arrested.”

Morrison tries to explain that their flight had been delayed, not canceled, as evidenced by a text message the airline sent her just minutes earlier.

Another video, which was shared by former Tennessee State House candidate Bratt Batt, also shows the officer telling passengers: “you will be arrested for trespassing.”

The travelers argue that they no longer have valid tickets because of widespread Southwest flight cancelations.

“You have no ticket. You don’t need to be in the secured side. Let’s go,” the cop replies.

In a second video uploaded by Morrison to TikTok, she continues to challenge the officer’s actions, telling him it’s “absolutely inappropriate” for him to threaten passengers with an arrest for trespassing “simply for standing the line.”

Robinson and Morrison told The Tennessean that they were not disrespectful towards the airport officers or Southwest personnel.

Robinson also said that one of the cops seemed to follow them as they headed out of the airport. When she confronted the officer about it, Robinson said he headed the opposite direction but continued watching her family from a distance.

Following the release of the videos Wednesday, the Nashville airport put out a statement confirming that police were sent to C-concourse “to escort passengers to the pre-security ticketing counters.”

“We understand and appreciate the frustrations traveler may have, and we are working to provide the best passenger experience for all,” airport officials added.

The management of the airport has not identified the officers seen in the video or commented on whether any passengers were arrested for trespassing.

A deadly winter storm that walloped large swathes of the country during the busy holiday weekend ground or delayed thousands of flights.

Southwest Airlines was the hardest hit, scrapping some 14,500 flights since last Friday.

The US Department of Transportation and Congress both signaled their intention to investigate the air carrier’s response to the winter weather.

Transportation Secretary Pete Buttigieg has called on the airline to issue refunds for canceled tickets and reimburse its customers for expenses associated with their travel delays, including hotel stays, transit costs and meals.

On Friday, Southwest planned for things to get back to normal after a tumultuous week, but the domestic carrier still logged 41 cancellations and 99 delays at airports across the US.

Overall, there were 96 cancellations and 676 delays within, into and out of the US as of this morning, according to data made available by the flight-tracking site FlightAware.com. 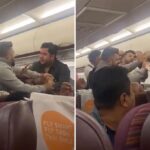 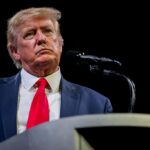