The Air Force has grounded its entire B-2 Spirit fleet and will inspect each stealth bomber after one of the aircraft caught fire during an emergency landing earlier this month.

The multi-role bomber, which was first unveiled in 1989, is capable of delivering both conventional and nuclear munitions. The 20-aircraft fleet is based out of Whiteman Air Force Base in Missouri.

A B-2 Spirit experienced an undisclosed in-flight malfunction that resulted in an emergency landing at Whiteman on Dec. 10. No one was injured.

Another B-2 had to make an emergency landing in September 2021 after the bomber’s hydraulics system failed.

A timetable for the B-2 fleet’s grounding was not released. A spokesperson for the 509th Bomb Wing did not immediately respond to a request for comment on Monday evening.

The Air Force unveiled the B-2’s replacement earlier this month, the B-21 Raider.

“The Raider was built with open-system architecture, which makes it highly adaptable,” Secretary of Defense Lloyd Austin said. “The B-21 is multi-functional. It can handle anything from gathering intel, to battle management, to integrating with our allies and partners.” 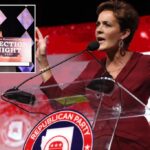