It’s over.  Addison Rae’s parents, Monty Lopez and Sheri Easterling, are divorced, the social media father confirming the news to Page Six. The official separation comes after Lopez was accused of having an affair with Renee Ash. The exes share daughter Addison, 22, and sons Enzo, 15, and Lucas, 9.

“Our divorce is finalized. What I can do from here on out, I can move forward,” Lopez told Page Six on Wednesday, November 23, Ash joining him in the interview.

Lopez’s representatives did not immediately respond to In Touch’s request for comment.

Ash, 26, first came forward with claims that she had a romantic relationship with Lopez, 46, in July. She claimed that their affair began in March after they were introduced by a mutual friend.

While exclusively speaking to In Touch, Ash insisted she didn’t know that Lopez and Easterling were still together at the time of their alleged affair. “What I was under the impression of, was that they were together for their public image, and for business,” she claimed. “He said the longer we hold out on being private and keep up with the quote un-quote facade, the bigger the checks L for two years,” she added. “Him and Sheri have not had a proper relationship in I think longer than that.”

“It is my understanding that he’s been in L.A. for two years,” she added. “Him and Sheri have not had a proper relationship in I think longer than that.”

Ash also revealed that Lopez introduced her to his family and they spoke to his mother via FaceTime while on vacation in the South of France. “Even when we were just friendly, me and him would FaceTime his younger brother in the middle of the night to laugh about it,” she claimed.

When asked if she considered reaching out to Easterling or Rae when she learned that Lopez had been lying to her about his marriage, Ash said that the thought never crossed her mind. “This man has done damage to his family, to me. I don’t want to disturb them any more than they are disturbed already,” she said. “Not to make it about me, but I am also dealing with a lot of hate and a breakup. If I were ever put in touch with them, I would love to talk to them.”

Shortly after Ash came forward with the allegations, Easterling issued a public statement on the matter.

“Personal matters being brought public are always challenging and overwhelming for anyone involved. I will be OK,” she wrote via Instagram Story on July 7. “My biggest concern is — and always will be — my children and their fragile hearts and minds. I will always do my best to try to protect them. My goal is to make sure that they feel secure and safe and know that everything will be OK.”

She concluded, “Thank you all for the love, support and kind messages. It means the world to me.”

Days later, Easterling confirmed her single status by writing that she is a “single mom” in her Instagram bio on June 10. 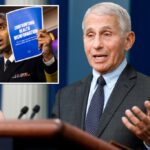 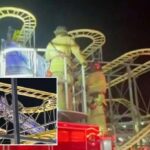