An Arizona man allegedly killed his 80-year-old roommate, then pawned off the chainsaw he used to dismember him — with human remains still stuck in the blades, reports said.

Thomas Wallace, 58, allegedly hocked a chainsaw that had “an odor of decomposition” and pieces of flesh, ligaments and other biological matter on it, Fox 10 Phoenix reported.

Officials say he cut up an Air Force veteran and stuffed his remnants into trash bags then wrapped them in linens in a Phoenix home they shared, according to Fox 10.

Police were called to conduct a welfare check last week by the vet’s family, who hadn’t heard from him for about a month. Authorities forced their way into the home, which had a “foul odor,” and they found trash bags stuffed with body parts and the victim’s decapitated head among linens, the station said.

Blood was reportedly splashed on walls, the ceiling and furniture.

Police tracked the victim’s missing pickup truck to a motel where they arrested Wallace and Ramona Gonzalez – who had also lived for a time in the apartment, struggled with drug use and previously pawned off the victim’s possessions.

It’s not clear when the victim died, but Gonzalez allegedly denied involvement in the slaying and told cops she and a friend found blood and the body in the home on Sept. 30, KPTV reported this week.

Wallace and Gonzalez are accused of selling the unidentified victim’s possessions last month, including the 10-inch saw and a camera bag that still contained the dead man’s business cards. They took in $50 for the items, court records alleged.

A neighbor told the station the victim was “a good neighbor” who would help anybody.

“It’s a sad thing to happen to him. He didn’t deserve that,” Ruby Lowry told KPTV. “I hope they get what they deserve because he would help anybody. That’s probably why he had them over there.”

Wallace was suspected of second-degree murder and slapped with charges for concealing the body and trafficking the stolen items. He was held on $1 million cash bond.

Gonzalez was set to face charges of fraud and theft. 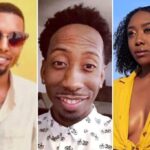 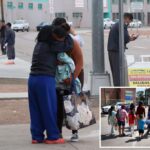