Accused serial killer nurse Lucy Letby allegedly tried to murder a premature baby girl by force-feeding her “massive” amounts of milk through a nasal tube, a UK court has heard.

Letby, 32, is accused of overfeeding the sick baby — known only as Child G — while watching over her in the Countess of Chester Hospital’s neonatal unit in September 2015, the BBC reported.

The nurse, who is currently on trial for allegedly murdering seven babies and trying to kill 10 others, struck just hours after making a banner to mark Child G’s 100th day of life, prosecutors said.

Dr Stephen Breary, who was the on-call consultant in the neonatal unit at the time, testified in Manchester Crown Court that the baby’s health had been “improving” and was “stable” on Sept. 6.

In the early hours of Sept. 7, Dr Breary said he received an emergency call because the baby had “very large projectile vomit” that landed on the floor and a chair next to her crib.

“This was not something I had witnessed before,” Dr Breary testified.

Medical expert Dr Dewi Evans, who was brought in by the National Crime Agency to review the case, testified it was “astonishing” for such a small child to vomit so severely.

“For a baby of 2kg to vomit that far is quite remarkable. Even more astonishing is the vomit that ends up on the chair. That is several feet away,” he told the court.

The baby’s health rapidly declined in the wake of the vomiting — and she had to be intubated and placed on a ventilator.

Dr Evans said the only explanation was that Child G “had received far more milk” than the approved 45mls in her feeding tube, adding that it “cannot occur accidently.”

The baby survived but was left with irreversible brain damage in the wake of the ordeal, the court heard.

Letby was arrested in 2018 after police started probing a spike in the number of newborn deaths in the neonatal unit under her watch.

The disgraced nurse, who has denied the allegations leveled against her, is charged with killing five baby boys and two girls, as well as the attempted murder of five boys and five girls. 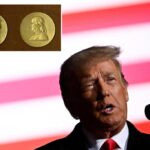 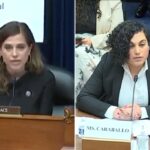 Rep. Nancy Mace skewers liberal activist with her own tweets