The neighbor, who asked to remain anonymous, told The Post Sunday that Kohberger usually kept to himself but could always be heard at odd hours.

“He’s normally a very late night person, going to the bathroom and vacuuming at 1 or 12 in the morning,” she said “I have kids, so sometimes I thought of speaking to him or complaining, but never did.

“It seemed like he never slept because he was always doing something all night.”

She and her husband were in complete shock when their upstairs neighbor was named as the suspect in the brutal University of Idaho murders that rocked the community.

“I don’t know how he could’ve killed people because he doesn’t look that tough,” she said. “We are all Ph.D students here so it takes a lot of hard work and smarts to get to this point. You don’t think someone like that could do something like this.”

Kohberger, who was studying criminology at Washington State University Pullman, was living in student housing that was usually meant for Ph.D students with families. He moved there in August, the neighbor said.

“At first he moved in by himself and we thought his family would come later, but he lived there alone,” she recalled.

She said she once saw someone who looked like another young female student get out of Kohberger’s white car, but they parted ways and went to their own apartments.

The neighbor, also a graduate student, said she and the accused killer would say hello to each other in passing, and she once heard Kohberger bring a woman home. She didn’t see the woman, but the walls are thin so she heard Kohberger and the woman talking.

Some residents who lived nearby told Fox News he kept a low-profile.

“I’d see him go check his mail, that was it. Other than that, I’ve only seen him like twice the whole time, and I’ve lived here since July 2021,” Justin Williams, a 34-year-old employee at WSU who lives in an adjacent building to Kohberger told Fox News.

Police believe the accused murderer acted alone, but details about what led law enforcement to him remain scant.

Kohberger is currently in Pennsylvania jail after his Friday arrest at this parent’s home.

Once he appears in Idaho court, officials can legally release Kohberger’s probable cause affidavit, which should shed some light on how he was nabbed nearly seven weeks after the shock slayings.

Kohberger “is eager to be exonerated of these charges and looks forward to resolving these matters as promptly as possible,” his public defender Jason LaBar said in a statement.

His family on Sunday said in a statement released by LaBar that they are standing by their son in an effort to “promote his presumption of innocence.”

Kohberger is accused of fatally stabbing students Kaylee Goncalves, Madison Mogen, Xana Kernodle and Ethan Chapin on Nov. 13. Police said they have yet to locate a murder weapon. 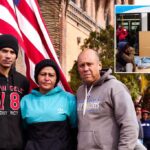 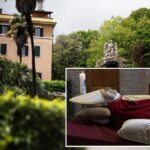