Five teenagers were charged with second-degree murder in connection to the Christmas weekend fatal shooting at Minnesota’s Mall of America.

SWAT officials arrested two 18-year-old men and three 17-year-old boys at a home in nearby St. Louis Park at 8:40 a.m. Saturday, about 12 hours after a 19-year-old man was shot dead during a brawl inside the shopping complex, Bloomington Chief of Police Booker Hodges said at a press conference.

Hodges said he is confident one of the 18-year-olds arrested pulled the trigger — although officers have not yet ruled out the possibility that there is more than one shooter.

A sixth suspect was still being sought.

Police believe the Friday shooting was an escalation of a “long-standing feud” between two groups of teens.

The teens had been brawling inside the first floor of the mall’s Nordstrom Friday night when one of the men whipped out a weapon and opened fire, police said.

The teen victim, who has yet to be publicly identified, was shot “multiple times” and pronounced dead at the scene. Another woman was slightly grazed by a bullet but did not sustain any injuries.

Security footage captured the group run out a nearby door and pile into a vehicle, Hodges said.

Officers recovered evidence at the St. Louis Park house Saturday morning, including proof that Hodges said indicated the teens made a pit stop between the mall and a safe house.

“The people we arrested here after the shooting, appears that they felt it was necessary to get something to eat. So they went to White Castle … and got a crave pack,” a visibly irritated Hodges said.

Those arrested are not from Bloomington but are from the Twin Cities area.

They are “flat out” refusing to cooperate with authorities, Hodges said, with some even declining to share their names.

Hodges did not say whether any weapons were recovered. The Medical Examiner will reveal the victim’s identity in the coming days.

The shooting is the first-firearms related homicide in the Mall of America’s history, Hodges said. It is the second murder in the mall ever, the first being a 1999 domestic-related stabbing.

The chief reiterated his Friday message urging those involved to come forward and be forthcoming with information. He also warned those aiding fugitives that they could find themselves in handcuffs as well.

“If you come here and murder people in our mall you get one of these at Christmas,” Hodges said while holding up an orange prison jumpsuit and matching orange Santa hat. “Five people got one of these today.”

“We’re not playing that here. You’re going to jail. And we’re going to make sure that anybody else that helped these folks are going to go to jail, too.” 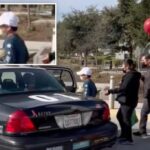 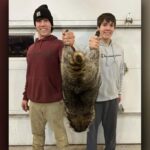